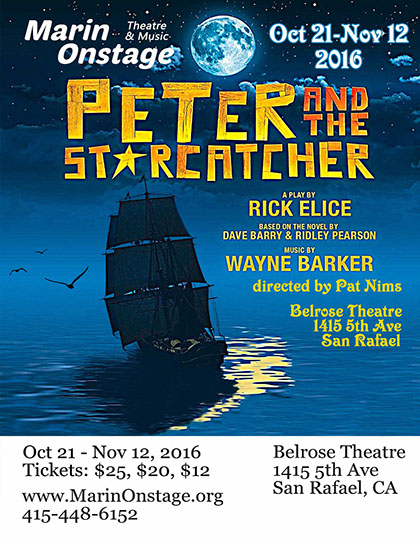 Peter and the Starcatcher

Peter and the Starcatcher

Peter and the Starcatcher is based on the novel by Dave Barry and Ridley Pearson.  It includes actors who have many roles to play.  There's Molly, on-board the Neverland with a nanny and a trunk with mysterious cargo.  Three lost boys, pirates, lords and mermaids join the cast of fun-loving characters inhabiting our show.  It’s a lovely, simple, and enchanting universe, more British mime than techno-Broadway, and a true  reminder of our own childhood imaginations' flight.

The play just moved from Broadway to Community after winning 5 Tony awards (best performance, best sound, best costume, best scenic design and best lighting). We were very lucky to get it for Marin, and will be having a lot of fun creating the magic of Peter with 9 actors playing 100 characters on two frigates racing to their destinies in our little theatre.