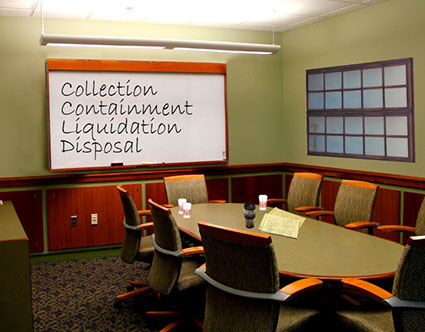 Anyone who has been in a brainstorming session for a company or other group will instantly recognize the format of this production.  How the session will go is anyone’s guess, and our five strong characters take us on a wild ride in this fast moving production.

This production is a premier for Marin County.  Written by Aaron Loeb in the East Bay, the play has evolved into a dark comedy/thriller that poses old questions in a new light.  Queenelle Minet directs our play.

IDEATION won the TBA Glickman Award for best new play in 2013, with the production at the San Francisco Playhouse.  The play then moved to New York Off-Broadway in 2016 with great reviews.

With a strong cast under the capable direction of Queenelle Minet, the story moves forward with rollercoaster lifts and changes that lead to destinations that are totally different from the innocuous tracks we begin the journey on.  Frank Sarubbi designed the lights and Rick Banghart designed the sound for this production.

IDEATION opens February 17 and runs until March 4 at the Belrose Theatre in San Rafael, with performances on Fridays and Saturdays at 8pm and matinees February 25 and March 4 at 2pm.  Tickets can be purchased in advance at www.marinonstage.org or at the door.  Ticket prices are $24 for General, $21 for Seniors and Students.